Every once in a while there is a piece of technology that boggles your mind and that creates disruption. The iPhone did that ten years ago, for example. The dynamics of the mobile phone market completely changed over night and we suddenly had a different relationship with our phones. Little over two months ago (December 2017), something big happened in the video/ photography space. GoPro released its first 360 camera called the GoPro Fusion. GoPro’s CEO Nick Woodman says that ‘Fusion is arguably the most versatile creative tool ever made’. Those are big words that made me curious. I have now had a GoPro Fusion for a few weeks and have tested it in various situations. Here is my short GoPro Fusion review. 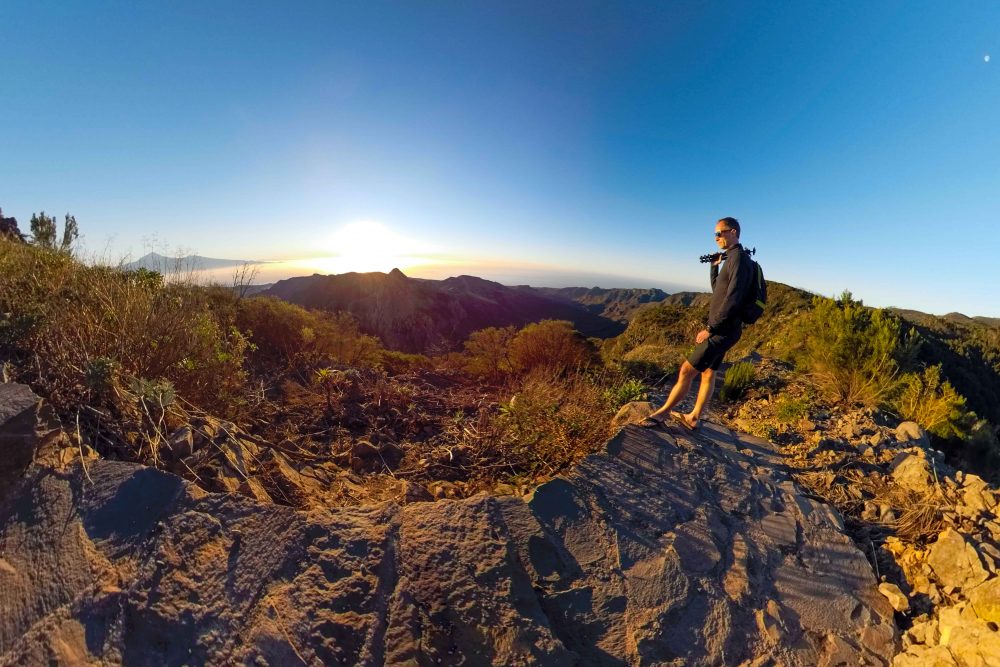 Let’s start with the easy stuff: Fusion is nicely built although it‘s bigger and heavier than the other GoPros. The camera has the same grey finish like the Hero 5 & 6 and feels like a solid piece of equipment. Fusion comes with a nifty selfie-stick that can also act as a tripod. You will feel right at home with Fusion’s menu and various setttings, if you have used a Hero before. Of course, it’s also possible to control the camera via the associated GoPro app on the smartphone of your choice (the app also allows you to download the files). Last but not least, Fusion responds to a set of voice commands which I use all the time (GoPro Take Video, GoPro Make Coffee). The voice feature is obviously dependent on the noise levels around you, but I have found that the Fusion does a super job responding even while skiing or biking. Operating the camera is therefore pretty straight forward from my point of view. 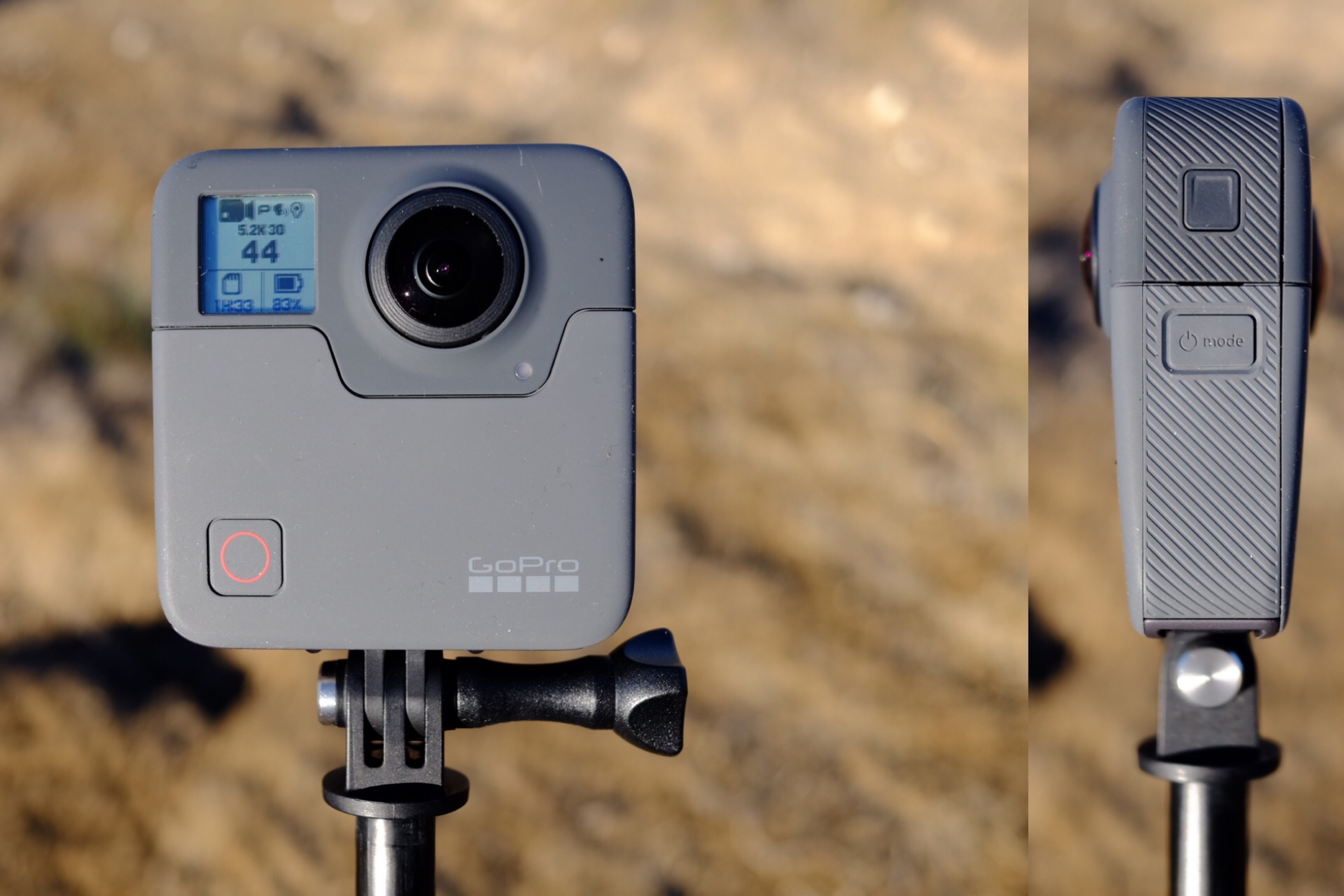 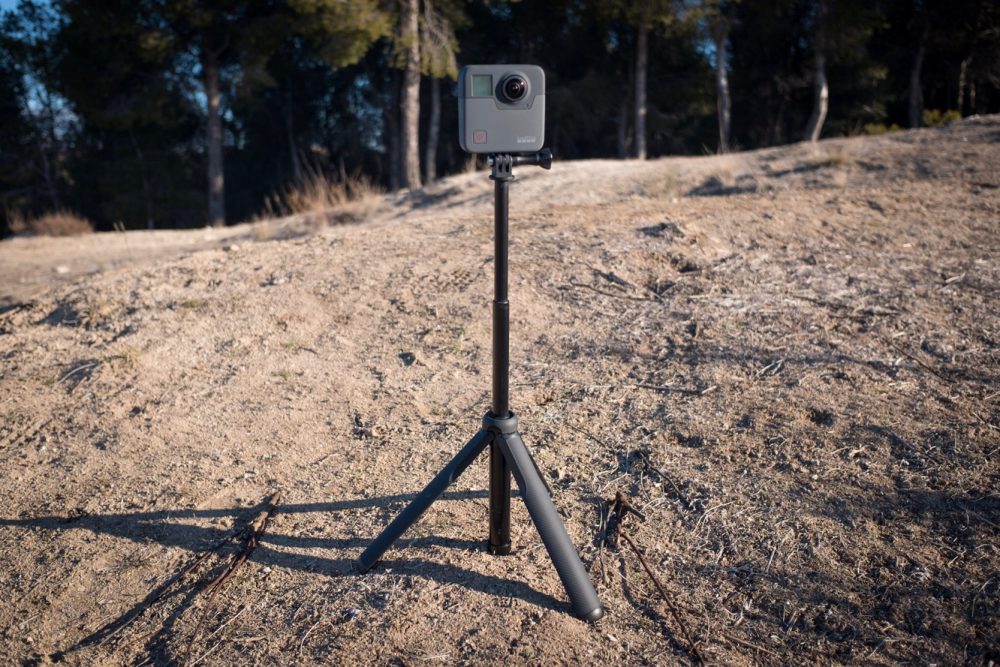 There are just two downsides with the current design. The two lenses are somewhat exposed and there is zero protection around them. I have seen various reports of them scratching easily. Also, the battery door is a bit flimsy and has accidentally opened a few times before. This might just be a problem with my Fusion and I will call GoPro support soon.

Now to the important stuff: taking videos and photos. Working with a 360 camera is a whole new world. It’s mind-blowingly easy. The GoPro Fusion literally captures everything around you. Just hold the camera and record. Don’t worry about framing. All you need to do is to choose the general angle/ viewpoint, e.g. higher up, low, sideways. That’s it. The framing comes later in post production. How cool is that? Sounds strange? Trust me, as a photographer I have felt some guilt for holding the camera without consciously fine-tuning the composition. Nevertheless, with so much flexibility comes a learning curve. The GoPro Fusion allows you to capture completely new and cool angles. I have learned that you need to be open to experiment the heck out of this miracle machine. Before I forget, there is just one thing you should do: make sure that the Fusion sits vertically above the selfie stick or tripod. Don’t tilt the camera (continue reading to learn why)! 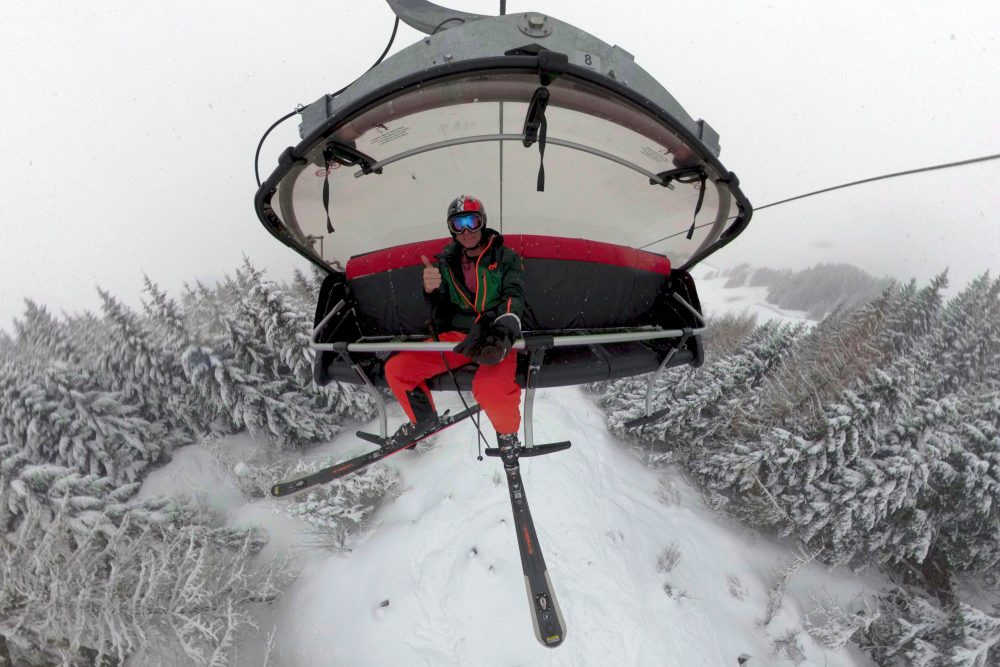 Once you have taken a video/ photo you need to stitch it in the GoPro mobile app or its desktop version called Fusion Studio. 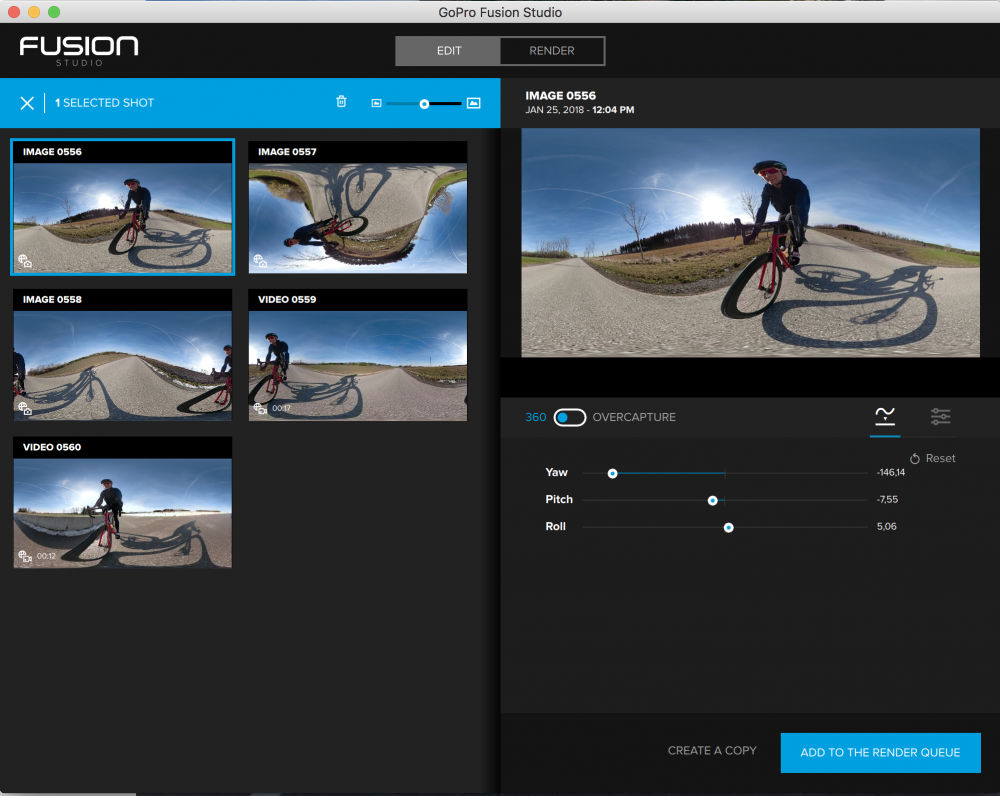 And this is where the magic starts. First of all, the software removes the selfie-stick (if it is placed vertically below the camera). You can then decide to either render the files as true 360 assets (allowing you to navigate the scene on your device of choice) or turn it into a regular video/ photo. GoPro calls this Overcapture: you navigate the 360 scene on your device and do all the framing and camera movements AFTER you have recorded the video. This gives you a ton of creative freedom and you can generate camera movements that would be incredibly difficult to produce with normal equipment. It’s basically like having your own camera crew with you. Look at this basic example. I sat Fusion on the side of the road and let it roll. Thanks to Overcapture, this short video looks like it was shot by my personal camera man:

All of this provides some incredibly cool possibilities including the ability to take some neat selfies. (GoPro calls this ‘Angle View’) 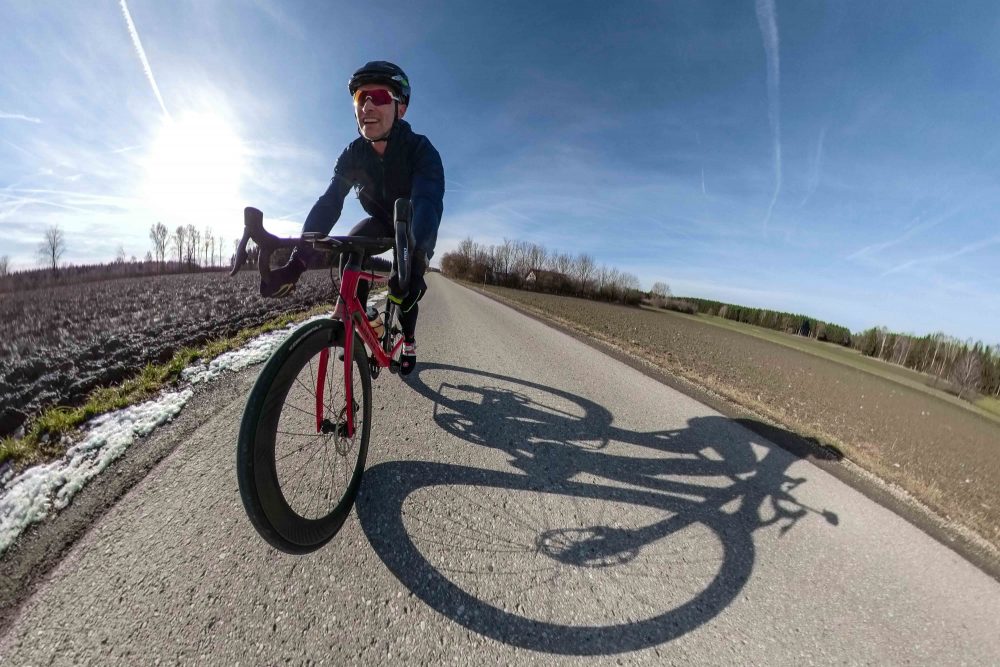 The other magic that happens in the app is top-notch stabilization. It works so incredibly well that you do not need a gimbal. Take a look at the sample video that I took while running with my colleagues. The Fusion is on the selfie stick while I run. Pretty damn cool. And 100% of the editing was done on my iPad within the GoPro and Quick apps. Stitching and stabilization quality is even higher when you do this on your desktop. (If you want to learn more about Overcapture make sure to watch one of the GoPro tutorials.)

Let’s speak about editing. The Fusion desktop app itself currently lacks any kind of powerful overcapture functionality (February 2018). All it does is stitch & stabilize. You therefore need to do the Overcapture magic in a different app once the files have been rendered. As of February 2018, there is a Fusion plug-in for Adobe Premiere but not for Final Cut or iMovie (which sucks for me as I use Final Cut – you can do some basic ‘overcapture’ editing in the current version of Final Cut but it lacks the required sophistication). I therefore currently prefer to do all my post editing in the mobile app. It works fairly well, it’s faster and it’s actually fun to do. The output is rendered at decent 1080p resolution.  BUT…the quality of the video output is definitely higher if done on your desktop. I am therefore looking forward to GoPro either enhancing their Fusion studio app or to releasing a Final Cut Pro plug-in.

So, how do I rate the image quality? Depending on the situation, pretty damn good given the fact that this is the very first version. Can you compare the output to that of the GoPro Hero 5 or 6? Not really but somewhat close in the right lighting conditions. There is occasional purple fringing and areas that are not 100% sharp. But that is not the point, IMHO. This is a whole new camera paradigm and there will be quality differences for sure. If I need high-quality regular photos and videos, I will use my GoPro (or any other camera). The key strength of the GoPro Fusion is that it allows you to capture angles that would typically require expensive gear along with additional camera men on the side. Also, the stabilization feature allows you to leave the gimbal at home. And that’s why I love the GoPro Fusion!

Is it all rosy and shiny?

Despite all the cool possibilities of the GoPro Fusion, it is not perfect. As a matter of fact, it can be quite frustrating:

Last but not least, GoPro Fusion is a 1.0 type of product. It’s nowhere near perfect and I have had some frustrating stuff happen such as the camera not turning off or the Wifi dropping. It’ll take a few firmware updates to get there and the stability of the entire hardware & software package is nowhere near that of the Hero 6. 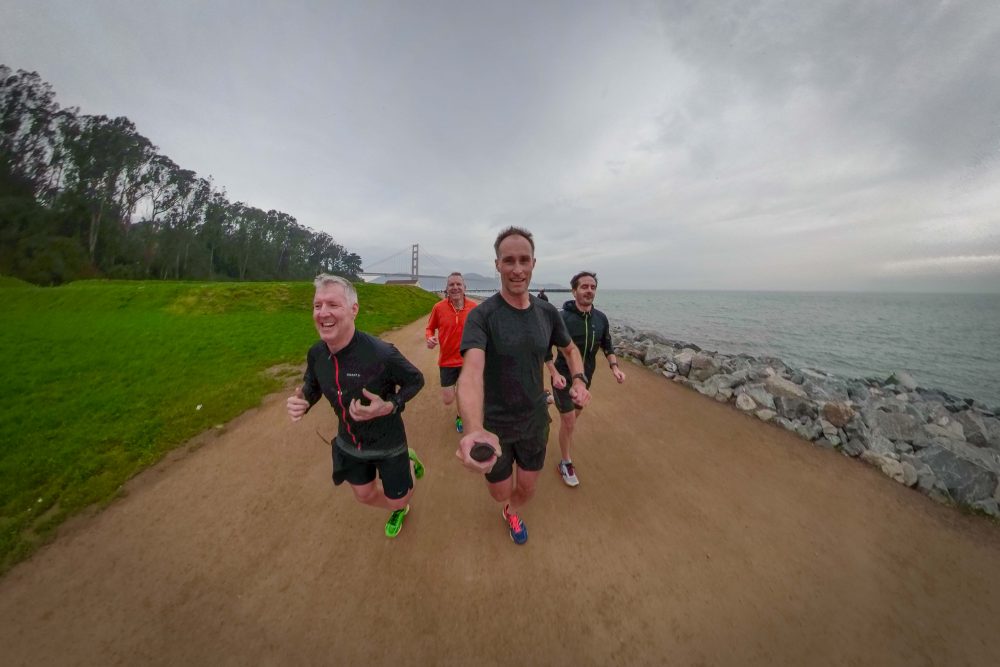 In summary, I have to say that I love the GoPro Fusion. This is a real game changer. The creative possibilities are endless. To take full advantage of Fusion’s capabilities you need to experiment and try various angles. It’s fun and I am pretty happy with the results so far.

But I have yet to find a workflow that allows me to minimize editing times and to reduce the volume of data being generated. I suspect that I either need to change my shooting style (shoot less but more deliberate) or purchase large bags of patience.

Let’s see what’s going to happen in the next few months. GoPro will most certainly issue new features over time that will make working with 360 videos even more fun and powerful. Stay tuned for updates.